Earn money as a poll clerk during 2020 Elections 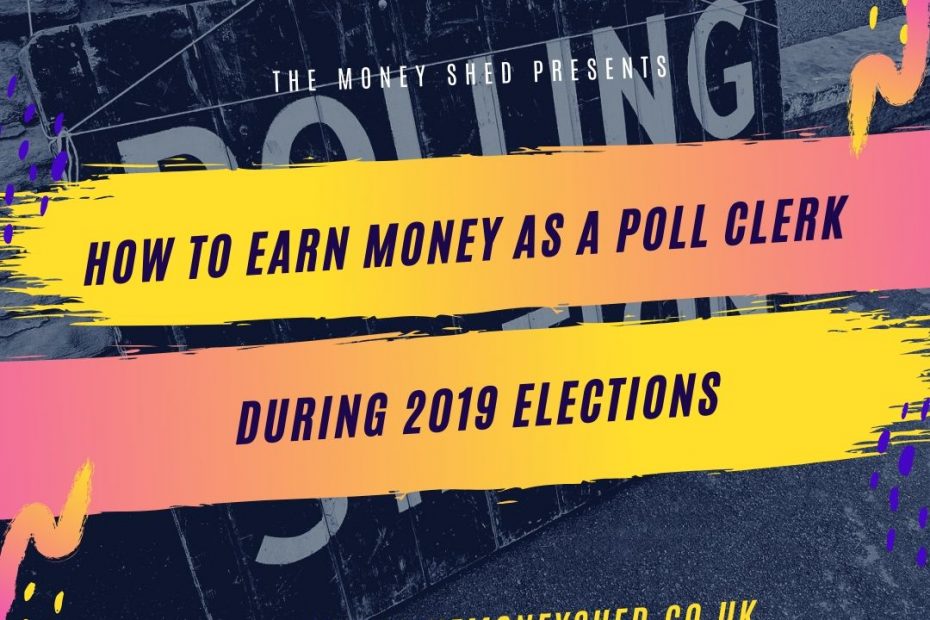 It seems like only 2 minutes ago we were visiting the polls for the General Election in December and here we are again, being asked to cast our vote in the local elections this May. It can feel like one of those high paying research studies that you do but without the pay!  With what looks like another General Election on the it’s the perfect time to grab yourself a nice little extra income for signing up to work as a Poll Clerk for your local council on those days.

Don’t forget, If you are after more money-making ideas then take a look at our Top Money Making Posts at the top of the page. We have everything on here from easy Surveys you can do for money from home through to Risk Free Matched Betting which I’ve personally made over £40,000+ from!

For each polling event, local councils require a temporary increase in staff to cover the hours that polling stations are open and the count afterwards (this can be late into the night). Most councils will advertise their positions on their website but others will require you to give them a call to see if they have any positions available. The common positions are Poll Clerk, Senior Counting Assistant, Counting Assistant and Postal Vote Opening Clerks – for some, it is possible to apply for multiple roles such as Poll Clerk and Counting Assistant.

What does a Poll Clerk do?

A poll clerk’s job is to help the Presiding Officer set up polling booths, check and mark each person off the list as they vote, stamp and issue the ballot papers to voters, make sure that voters cast their votes in secret, answer poller’s questions in a friendly and professional manner and show people who are unsure how to cast their vote; they must maintain the secrecy and security of the ballot at all times.

It’s a long day, usually from early morning (polling stations open from 7am) until at least 10pm (when the polling station closes). If you have applied to count the votes then that can go on until the early hours, depending on how quickly the votes are counted; this can get a little crazy.

Who can be a Poll Clerk?

Anyone over the age of 18 and literate is eligible to act as a Poll Clerk. If you are a member of a political party participating in the election, then you cannot be a Poll Clerk.

Pay for a regular poll clerk is around £200 for one day’s work, it does differ from council to council though. Other roles vary, some with set pay and others paid by the hour. You will be paid normally a few weeks after the election has taken place. If you work for the Council then the pay usually comes in your follow months pay and if you are external to the Council then it is normally in the form of a BACS transfer or a cheque.

One other important thing to remember if you are already in employment (especially in a Council role) is that you can normally take special leave to do this so there is no need for you to use your holiday allowance. This is very important if you end up working on postal vote counting which can go on for a few days before the election takes place so in that case you would still be getting paid from your regular job AND your poll clerk role!

How do you apply?

Visiting your local council’s website and then heading to the Elections / Election Team / General Election section is the best way to find out whether they are hiring for any positions during the listed events.

The work is pretty easy, albeit tiring and is certainly worth the money. Many companies will also offer you leave to work during an election so it’s definitely worth enquiring about. Check out the thread about it over on the forum HERE to see others who are stepping up to earn money during this General Election.

Make sure you don’t leave it until the last minute to apply. These paid positions fill up FAST with some requiring training on a weekend morning (normally paid!) usually taking place a week or two before either the election. In fact, some Councils recruit all year long for poll clerks so you will tend to see the same faces at Local Elections as you would do at a General Election which helps bring a real sense of community throughout the night.