International Money Transfers: Everything You Wanted to Know (But Didn’t Know to Ask) 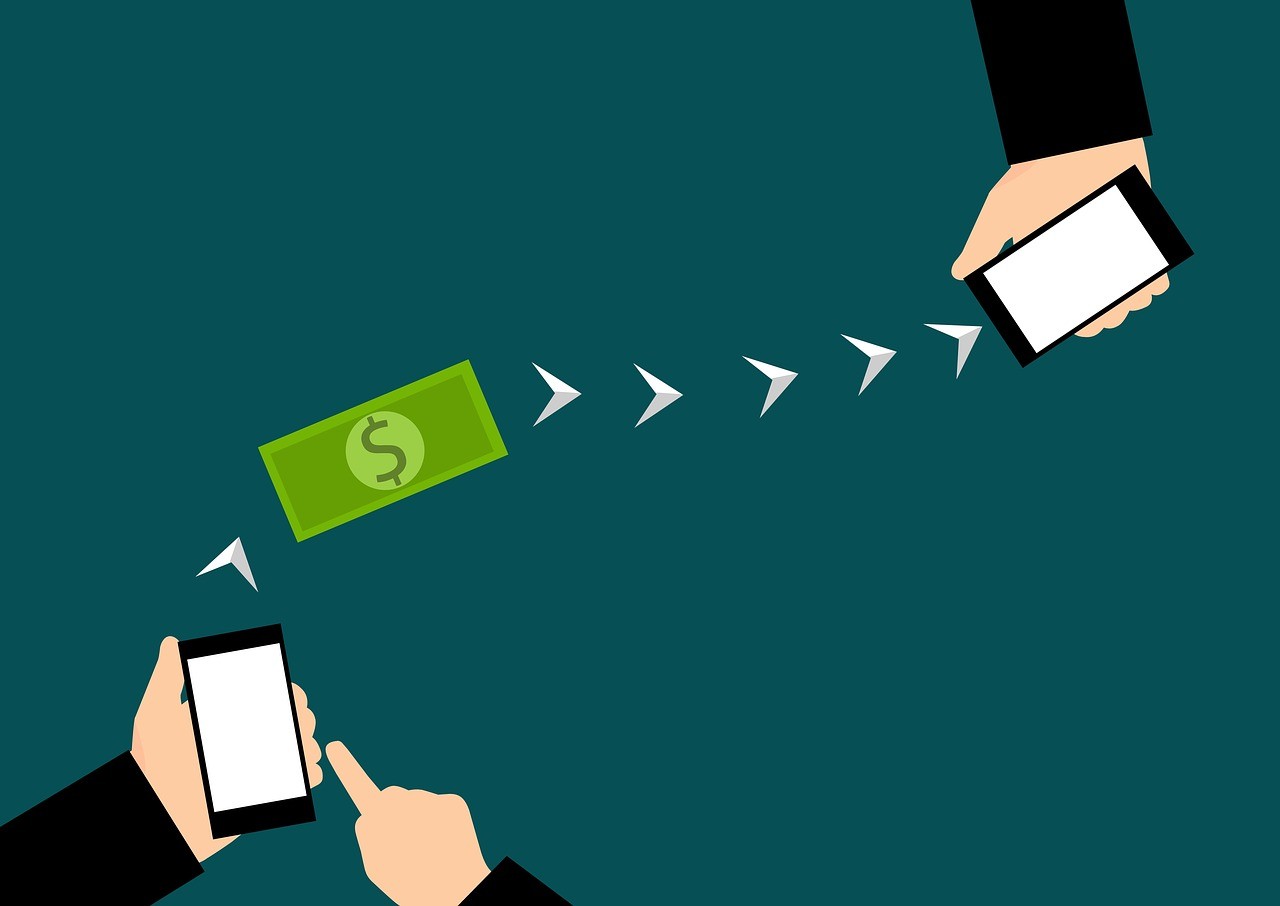 Regardless of what business you’re in, there’s a good chance that you’ll be met with international money transfers at some point along the line. Whether you run an international business that does a lot of cross-border transactions or are just needing to make a deposit on a vacation rental property in another country, you or your business will likely need to transfer money internationally at some point. As we all know when it comes to sending, receiving, and moving money anywhere, there are typically going to be costs associated with the process. Of course, if you’re sending £15 to your buddy to cover pizza from last week, then Venmo, CashApp, or other free services do that just fine. However, things start getting significantly different once currency transfers come into the picture, especially for high dollar amounts.

Unlike that £15 you sent your friend to pay for dinner, international money transfers require a currency exchange along the way. Switching from one currency to another means not only translating the value of your money to another currency (sometimes higher, sometimes lower), but it also means paying for the ability to do so. But who decides how much you pay to transfer and do some places charge less than others? And what about the process as a whole, how does that work? What are my options and which is the best one? Today, we’re covering all of that and more, so make sure to keep reading.

Moving money internationally is an especially relevant topic right now given the current Brexit situation. With all the uncertainty surrounding the terms of the UK’s departure from the EU, foreign exchange traders are wary of what’s to come. Because of that, sterling has been undergoing significant volatility and even greater implied volatility, meaning that traders expect big price swings sometime in the near future. As we continue to approach the March date of departure, it’s likely that the GBP will drastically change in value compared to other currencies. In fact, the implied volatility for sterling is even higher than several emerging market currencies, according to data from Reuters, and is even at its most volatile period since 2016 around the time of the first referendum.

For British citizens in the UK and living abroad, this has significant implications. High volatility means that their money is worth a lot more or a lot less than initially thought depending on the day and exchange rate. That means that for people looking to send money in or out of the UK, there’s a lot of fluctuation in the GBP’s value. Additionally, that fluctuation is even more important for businesses of all sizes that sell to UK customers or clients. Having a standardized pricing model doesn’t work as well when there is a lot of change in the value of a currency. Currently, international money transfers and exchange services are an ever-increasingly relevant topic as the demand for them continues to grow as we near what’s likely to be a no-deal Brexit come March.

Why the Exchange Rate Matters in International Money Transfers

If you’ve ever transferred or exchanged money internationally before, then you may just think of the exchange rate as a minor technicality. It just is what it is, right? Well, truthfully the answer is no. Of course, an exchange rate is going to be just a part of doing business, but not all exchange rates are created equally. This is true not only of small personal exchanges but for business transfers as well. Think of it this way: when you’re travelling abroad on holiday and fly into a new country, are you going to exchange currencies right there at a kiosk in the airport? The right answer is, of course, a resounding no (but if you’re reading this blog, then chances are you already knew that because you understand how money works and why it’s important).

Instead, you’re going to either utilize a credit card that automatically exchanges currencies for you at a better rate or take advantage of a bank’s currency exchange rate. After all, those kiosks at the airport or exchange counters in any touristy part of a city are notorious for their high exchange rates — an unnecessary fee you pay for convenience and urgency since you didn’t plan ahead. As we all know, the effective “exchange rate” you pay isn’t static. Besides the constant fluctuations in the foreign exchange markets, the rate you pay is also dependent on where you exchange your money. But what you’ve gathered from just that small real-life example becomes even more important when dealing with much larger currency transfers.

The fact is, that small exchange rate that you’re used to paying becomes multiplied greatly when dealing in large amounts for international money transfers. Don’t be fooled by foreign exchange counters that claim “no fees” or “no commissions,” either. While they may not tack on additional fees, they make up for it by charging a much higher exchange rate than other providers. See, the “exchange rate” you’re paying for isn’t just the actual rate from one currency to another like it would be if you were forex trading. Instead, it’s the actual rate itself with a high spread; let’s explain.

The real exchange rate — also referred to as the “mid-market rate,” the “spot rate,” or the “interbank rate” — is what the actual rate of one currency to another is. If you search for the exchange rate between the USD and GBP, the results will show you this rate because that’s what the foreign exchange (forex) markets are trading at. For example, 1 GBP is worth 1.29 USD at the time of writing. That means that £10,000 should translate to $12,851.98. If you were trading on the open market, that’s what you’d get for it.

However, you’ll notice when converting currencies that the end result is not that same $12,851.98, even from providers who claim “zero fees.” To better illustrate this, let’s look at a comparison of different providers and what that £10,000 yields after conversion thanks to a real-time data tool from Transferwise. 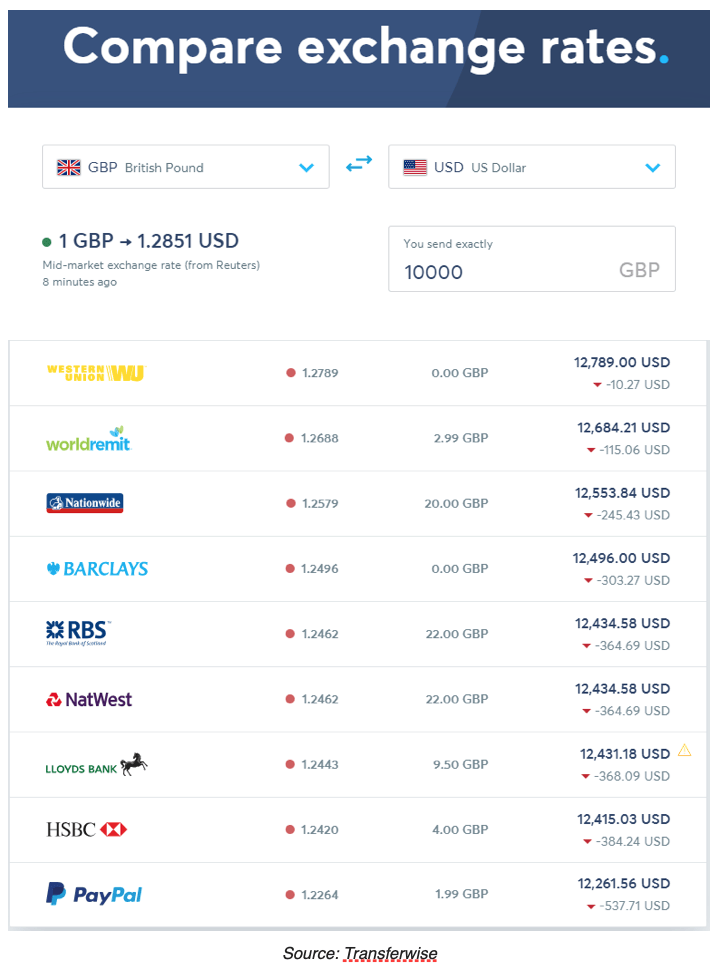 In this example, we see a substantial change in the amount of USD received, even in the case of providers offering “no fees.” This is most clearly seen with Barclays. The bank technically charges no fee for the conversion, but because of the high spread, you end up paying a de facto fee of just over $300 — not a small chunk of change considering all you’re doing is exchanging your own money.

This works for financial institutions because they have access to the real exchange rate. In reality, this rate is only accessible for banks, financial institutions, and Wall Street traders moving large volumes of currency, not the average small business or individual (unless you’re a retail forex trader, but that’s an entirely separate story and there will be commissions, withdrawal fees, etc.). That’s why the term is known as the “interbank rate” and it’s the best rate available. Banks make money off of transfers by exchanging your currency at a higher rate (some higher than others) and then keeping the difference. Pretty simple, right? Great, but why does all this matter? We’re glad you asked!

Currency Transfers: What That Means For You

Now that we have a basic understanding of international money transfers and exchanges, there are some important implications to consider. We know what services to avoid like those booths at the airport and certainly PayPal, but then we still need to decide on what we ought to use. Fortunately, there are services available to us other than traditional banks and high-rate counters and they often come with additional advantages.

There’s an entire industry of companies specializing in foreign exchange transfers to choose from and they offer significantly better rates than most other places. Banks are counting on you following the path of least resistance and exchange through them at marked-up rates and additional fees. However, exchange services typically have access to the same interbank rates but take smaller margins to help draw customers away from banks, meaning a great advantage for you.

There are a lot of these companies out there and you’ve probably heard of some of them before like OFX, WorldFirst, and Transferwise even if you’ve never exchanged currencies. Because there are so many choices, we strongly recommend doing some research and comparing the differences between them. Better yet, you can reach out to most and get a free quote in minutes to compare your options.

To see a list of different options and reviews on different services available, take a look at Money Transfer Comparison’s reviews and ratings on top service providers. Money Transfer Comparison breaks down all of the available currencies, options, and pricing from different providers and does a side by side comparison of them. There you’ll find complete comparisons and reviews of big names in the industry like a MoneyCorp review along with numerous others. And, many of these foreign exchange providers offer added benefits like forward contracts, something you won’t be able to find from a bank.

A forward contract is essentially a type of insurance you can purchase ahead of time to insulate yourself from the risk of volatility (something that there’s a lot of in the GBP markets). By purchasing a forward contract, you’ll have the ability to lock in today’s exchange rate for a future transfer, even though you’re not exchanging currencies today. Typically, you won’t have access to these types of products from a bank as an individual or small business, but using an exchange service allows you to purchase them as a private client. A forward contract may be especially useful for anyone exchanging the pound in the future. Unsure about the exchange rate of the GBP/EUR as we get closer to Brexit? No problem. Lock in a rate sometime this month and if prices drop significantly, you’ll be covered.

That was a lot to cover, but now you should have a better idea about the world of international money transfers. As we’ve already seen, there’s a lot more going on behind the scenes than just the flashy sign reading “Zero-Fee Exchanges!” In fact, there are certain cases where paying an exchange fee and getting a rate closer to the interbank rate will actually yield a better exchange than a so-called “zero-fee” offer. After everything’s said and done, there are some key takeaways to remember the next time you’re looking at currency transfers.