Interview : Find out how to earn money by sharing deals with FindItForLess 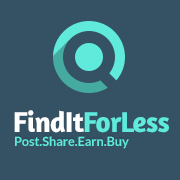 FindItForLess grabbed my attention around the tail end of last year as a fantastic alternative to sites like HotUKDeals. What’s the biggest advantage? The fact it pays YOU to share deals! We sat down with the owner Nick to find out a lot more about this fantastic website.

Can you tell us about what FinditForLess is and how it works?

Find It For Less is a site which will help people find the latest bargains online but also earn cashback. The idea is that our members post offers they have found online for other members and if somebody buys the offer, both the person buying AND the person who shared it get cashback from that order. You can also get cashback simply by sharing a link with others. If you know somebody on Facebook who wants to buy a toaster, send them a link to a toaster on Find It For Less and if they buy it, you get some cashback.

As well as the deals, there is also the Product Search where you can type in something you want to buy (ie. Xbox One Console) and it will search over 3,000 stores and 15 million products to bring you the best price. If you buy using this, you will also receive cashback. This way you are saving money by finding the best price, while earning a bit of money too!

Can you tell us a bit about your background before starting Finditforless?

I am a web developer / designer that has been making affiliate sites for myself and clients for around 8 or 9 years. I am self taught in Web Development starting off with basic Flash and PHP around 15 years ago on dialup.

I have always worked in IT or web development so am used to the challenge of finding a way to make or fix something based on a specification.

What made you decide on the name FinditForLess? Were any others in contention?

Find It For Less started as a price comparison engine which slowly grew into what it is today. At the time of setting it up there were some other names (It was a while ago so can’t even remember them). I thought Find It For Less did exactly what it said, just finds things for less!

The other issue was finding a name where the domain name was available or the owner wasn’t asking for silly amount of money as it seems quite a lot of them had been snapped up years ago.

What made you want to get involved into the shopping / affiliate sector?

I have been an affiliate for the last 6 or 7 years and thought that there was a gap in the market for this type of site. I have always worked with data feeds / API’s so thought it would be an ideal project. As Find It For Less was originally just a price comparison engine, I kept having more ideas on features that could be added so over the space of 12 months the site was reborn to how you see it now!

I also know people personally who were going through bad times financially but had so much time on their hands and could tell you off the top of their head where all of the latest offers were online. They are fantastic at finding bargains so they should be rewarded for sharing them so other people can save money too!

Were you convinced there was a market for your site, even with big competition in the form on HUKD etc. ?

Yes, the cashback / offers niche is very competitive when you look at the other websites which have multi million pound companies behind them but none of them seem to have all of the features that Find It For Less has which is why I thought it would succeed against them once people are aware of just how good (for the users) Find It For Less is and how lucrative it could be.

What advantages does posting deals on Finditforless bring for the user that HUKD doesn’t?

If other users think a deal is great, it is in their interest to share it as much as they can and promote it for you as if it is a great seller, they will receive cashback just for sharing this with others too!

What are your long term plans for the site as we head through 2015?

Technically the site is always going to grow and new features will be added but at the moment it is all about promotion and marketing. I will be developing tools to help people market and promote the site as easily as possible (and help them earn while they promote).  I will be trying to form partnerships with as many other sites as possible and get some other retailers on board.

I have been trying to speak to as many Find It For Less members as possible with customer service as a priority so I will be keeping in touch with them to see if they have any ideas or issues that could make the site a lot easier to use.

What troubles have you come up against since launch that you didn’t foresee happening?

The main two things that the site relies on are people to post offers and people to see them (and buy them). It has been a lot harder to build traffic and to get the great offers the members are posting over to the buyers. I have developed things like WordPress Plugins and Forum Plugins to help promote the site (while help members earn sharing cashback).

There have been a few issues with datafeeds and certain big stores asking for changes to be made immediately as to not effect their brand but they were easily sorted.

What sort of earnings have people reached on FIFL and with how much effort?

The top earners so far are people who have posted quite a lot of offers. After speaking to them they have spent in total about an hour and a half here and there adding offers they have found themselves or on other sites and have earned around £20 cashback in a month without having to spend any money themselves and just an hour and a half of their time.

The great thing is that even if an offer is posted now, somebody can stumble upon that offer in 6 months and click through and buy it at full price and members will still earn cashback from that.

What sort of feedback have you been getting about the site so far?

Once I have taken the time to explain the site to people, how it works, the benefits and the many ways to get cashback people love it. The main feedback is that it can be quite confusing in how it works and also that it isn’t busy enough with people buying things which will both be addressed. Also the cashback rate isn’t as high as places like Quidco and Top Cashback who are huge in the industry but as the site is growing I am speaking to the retailers directly to get the cashback rates as high as possible.

So there you have it, if you want to give this fantastic site make sure to use the code SHED14 when you sign up as you get will get £1 for free! To sign up just go here